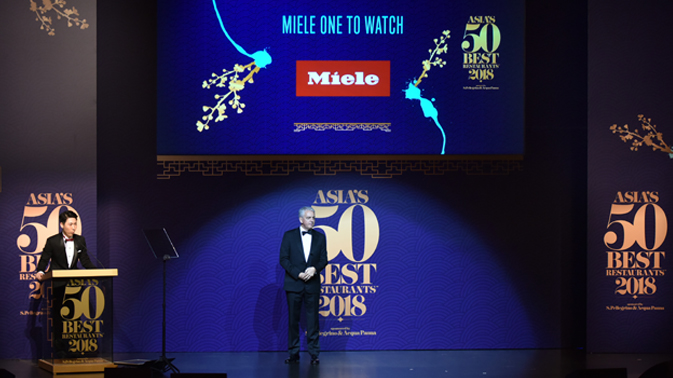 William Drew, Group Editor of Asia’s 50 Best Restaurants, says: “Toyo Eatery embodies the spirit of the Miele One To Watch Award. With a menu celebrating local culture and traditional dishes, chef-owner Jordy Navarra is a young talent who is advancing the cuisine with creative flair and a progressive approach, but also with precision and attention to detail.”

The name Toyo derives from the Filipino word for ‘soy sauce’ and reflects Navarra’s philosophy: Toyo Eatery’s menu draws inspiration from everyday local ingredients and incorporates refined techniques and intricate layers. Navarra and his wife, May, who oversees the restaurant floor, are committed to celebrating local culture and interpreting Filipino culinary traditions in a modern context. Each dish is designed to convey a unique Philippine flavour or represent a traditional cooking method while the furniture, dinnerware and accessories are crafted by local artists and designers.

Navarra’s pride in his heritage is evident in Toyo Eatery’s menu. He created one of the restaurant’s signature dishes, ‘Garden Vegetables,’ based on a traditional folk song that lists 18 local vegetable varieties. In a nod to nostalgia, his upbringing and the terroir of the Philippines, Navarra’s dish features all 18 ingredients in various forms, whether charred, sautéed, crushed or pureed.

“From the start, our mission at Toyo Eatery has been to reassess, rediscover, and find a deeper understanding of Filipino culture through food,” explains Navarra. “As Toyo Eatery approaches its second anniversary, this award is the gift we never saw coming. Being granted the Miele One To Watch Award by such a respected authority is an amazing honour. We are thankful to those who appreciate and acknowledge what we do. Toyo is still in its infancy and we still have much to do, but we’re inspired to learn from the chefs whose restaurants are included in the list of Asia’s 50 Best.”

Navarra began his career at Heston Blumenthal’s legendary restaurant The Fat Duck, where he developed his technical skills and progressive approach. He returned to Asia to work at Bo Innovation in Hong Kong before landing in Manila, where he launched Black Sheep in 2014. He and May opened Toyo Eatery in 2016, offering diners a choice between a three or 11-course set menu as well as à la carte options.

“Toyo Eatery impresses us by taking inspiration from everyday local ingredients and recipes and bringing them to the level of culinary excellence with passion, expertise and a progressive approach,” says Mario Miranda, Regional Managing Director Asia at Miele. “This same attitude involving constant improvement and innovation are part of Miele’s ‘Immer Besser’ brand philosophy. We are honoured to present this year’s Miele One To Watch Award to Jordy Navarra and the team of Toyo Eatery.”

Miele will also present #50BestTalks on Monday, 26th March, 2018 at the Grand Ballroom, Wynn Macau from 10am until 1:15pm. Under the theme ‘Exploring Identity’, the half-day forum will feature provocative discussions, inspiring presentations and live interviews with Asia’s leading chefs. Hosted by Asia’s 50 Best Restaurants, the in-demand speakers include:

How Asia’s 50 Best Restaurants list is compiled
The list is created from the votes of the Asia’s 50 Best Restaurants Academy, an influential group of over 300 leaders in the restaurant industry across Asia, each selected for their expert opinion of Asia’s restaurant scene. The panel in each region is made up of food writers and critics, chefs, restaurateurs and highly regarded ‘gastronomes’. Members list their choices in order of preference, based on their best restaurant experiences of the previous 18 months. There is no pre-determined check-list of criteria, but there are strict voting rules.